When autism is first diagnosed, parents can be told that if their child is not speaking by the age of 4 or 5 then they are unlikely to ever do so. However, back in 2013, Paediatrics journal published a study based on more than 500 children which showed that this is not always the case, which has led many parents to want to explore more on the subject of how to help your nonverbal child to communicate.

Obviously, every parent wants to do what they can to help their child be able to express themselves, and so it is good to know that there are things that you can do to help your nonverbal child start to talk. However, before we talk about some ways that you can do that, it is important for us to stress that no two children who have been diagnosed with autism are the same. No matter how hard you try, a tip that works for one child or teenager, may not work at all with another child.

Do not worry though, most individuals who have been diagnosed as being on the autism spectrum will eventually learn to communicate in one way or another – even if it is not through speaking. Even if they don’t, this is not to say that they won’t be able to contribute to society still and live a comfortable and fulfilling life, especially with the use of assistive technologies, such as App2Vox.

Here are some ideas for ways you can help encourage language development in your nonverbal child, teenager or adult: 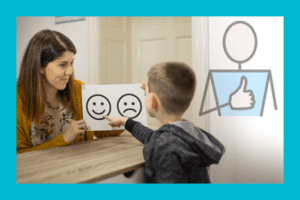 Children learn though doing things and playing, and this includes learning language skills. Playing games and interacting with your child, will not only bring you closer but also allow you to encourage their verbal skills as well. You can do this like reciting nursery rhymes, singing popular songs or even pretend shopping trips. While you are doing these sorts of activities, however, it is important to remember to position yourself in front of your child at eye level so that they can not only see you but can also hear you clearly as well.

Use mimicking in a positive way

Research has shown that mimicking the sounds your child makes and their behaviour when they are playing are both great ways to help them to build their communication skills and learn to talk. It works by encouraging your child to take turns and copy you which will help to make them more vocal. Only mimic the positive behaviour, such as rolling or driving a toy car, and not negative behaviour such as throwing things!

Using the simplest form of language when you are speaking to your nonverbal child will make it much easier for them to understand you and follow what you are saying. It also helps them to try and imitate your speech as well. If you child is nonverbal, start by using single words to describe things, such as ‘ball’ or ‘roll’. Once they get used to saying these words, you can then progress to using two words such as ‘throw ball’ or ‘sausage roll’. Each time your child grasps a method of speaking just move them up to the next level by adding another word, so one word, then two words, then three words and so on.

Nonverbal communication, such as facial expressions and hand gestures, are really important parts of communication and you shouldn’t forget about them when teaching your nonverbal child. Use both your voice and your body when you are communicating with your child, and encourage them to do the same – you can start by nodding your head every time you say yes, for example. As with the point above, make sure the gestures you use are simple so they are easy for your child to understand and imitate. Encourage them to use nonverbal communication as well, by getting things for them when they point at them, and then point at something you want them to pass to you.

Use their interests to your advantage

Rather than interrupting them to try and do a language ‘lesson’, see if there is a way that you can add some learning to what they are doing. If they are playing by themselves, for example, follow along and narrate what they are doing. So, you could name things as they pick them up, for example saying ‘shape’ when they pick up a shape and ‘in’ when they put it in the hole it should go in. By talking along with them while they are doing something they enjoy, they will start to associate the word with the action and thereby learn associated vocabulary.

It’s really easy to get carried away when trying to teach a language, and start to fill in the gaps yourself when your child is struggling to find the word. However, it is really important to remember the aim of this is to help your nonverbal child to talk, and so giving them some time to breathe and relax will offer them more of an opportunity to communicate in a better way, than you doing it all for them. You can also give them plenty of chances to communicate without talking too. For example, if you ask them a question and they don’t respond straightaway, wait a few minutes before you demand an answer from them. Make eye contact, and look at them in an expectant way while waiting for the answer. Observe their body language closely, and if they make any noise or gesture then promptly respond to them. This will help them to understand the power of communication and they will begin to understand where they stand.

For children with speech disorders, such as those on the autism spectrum, it is often helpful if they can hear what the specific feeling they are expressing or action they are completing is. For example, if they point to a drink you can say ‘you are thirsty’ and they will then know that the feeling they have is expressed in this way. You should try and incorporate these descriptions into everyday life in as natural and consistent a way as possible as a way of encouraging them to speak.

Use technological aids and visual supports

The help of assistive technological aids cannot be underestimated, as they can really help to foster speech development rather than taking the place of speech (as some people fear). For example, our App2Vox app allows the nonverbal child to touch a picture and produce a word which they can then repeat and learn. They can also use pictures such as this to represent their feelings and thoughts when they are just starting to learn to speak, making them feel less isolated and more confident in their communication abilities.

App2Vox was developed in association with autism together and is proudly supported by Committ, and our aim is to help people with autism to communicate simply by providing them with ap talks that will give them a voice. To find out more about our app, you can call our friendly team on 0161 974 7400.