If you are a parent of a child (or children) who are nonverbal, then you may be asking yourself ‘how to help my autistic child communicate’. For many children on the autism spectrum, difficulties with communicating are one of the first signs that your child is autistic. As we have spoken about before, all autistic children are different and so will have different level of communication skills – some children may have a large vocabulary and be able to read well, while others may have trouble understanding facial expressions and other communication cues. 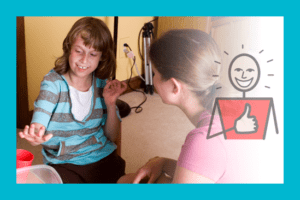 Some of the patterns of language or behaviour your autistic child may display can include:

There are, however, some simple ways in which you can try to help your autistic child to communicate:

Ways to Help Your Autistic Child to Communicate

One way of helping autistic children to develop their language and communication skills is to use autism apps.  They may be apps that are prescribed by your child’s speech therapist and are sometimes called augmentative and alternative communication interventions or AAC apps.

56 studies of AAC apps took place between 1980 and 2007 and a review of all of these studies was undertaken by Debora R P Nunes in 2008 for the International Jornal of Special Education. She concluded that; “Some of the advantages of using sign language included (a) its portability; (b) its characteristic of being a true language system and, (c) the possibility of communication occurring at a faster pace. Among the positive aspects of using a visual-graphic system were: (a) its iconicity; (b) its non-transient nature; and (c) the limited motor requirements for its use. SGDs were considered advantageous for (a) they allowed communication to occur at larger distances; (b) they permitted messages to be easily deciphered, and (c) required limited cognitive and motor demands.”

There are a variety of autism apps available on the market, with the most common being visual boards. Let’s take a look at some of the tools that are out there:

App2Vox is aac software which was developed in partnership with Autism Together, as we both strongly believe that all autistic children should be given the opportunity to communicate.  You can find out more about how it works by checking out the Features page of our website.