As adults we know that speech is essential as it helps us to communicate with people around us and to interact with the world in general. But, for many children and adults with autism, speech is not an option and they may find it very difficult to communicate with speach. These people are often termed as ‘non-verbal’ although they can find other ways to communicate without having to speak words, such as the use of aac devices for autism, and so, the ability to communicate should not be taken away from them.

There are a lot of options out there for non-verbal children with autism including AAC devices. AAC devices are an alternative communication system which allow people to use language without the reliance on traditional speech. These systems tend to use things such as gestures, pictures, sign language, visual aids and so on to help the person communicate, and they can also sometimes include a speech-output device as well. But do AAC devices for autism actually help children to speak? 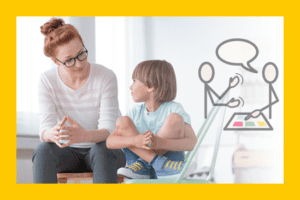 There have been lots of studies done over the years relating to AAC and Autism, with one common theme coming through from all of them. The use of AAC devices with children who have autism will not prevent them from speaking, as some people believe, and they actually may increase the speech potential of these children instead.

This is not to say that AAC devices will help every child with autism speak, we cannot say that for a fact. Every child with autism is different and so one thing will not help all of them. However, many of the children who were part of these studies showed no ill effects from using such devices, and in fact were found to have gained many benefits from using them. With no risk to using such a device, and potential improvements in terms of speech though, surely, they are worth a try with your child?

On top of these studies, AAC devices have been found to offer children the ability to communicate with other people even if they are not able to speak. If you are living with a nonverbal child who has autism, imagine how different your life could be if your child was able to press a button to tell you what they wanted, instead of them getting frustrated and potentially throwing a tantrum.

A lot of people believe that a child has to have a certain amount of skills already mastered before an AAC device will be useful to them – but this is just not the case. We have found that children can easily learn how to push a button, which is the only skill really need for AAC devices, while they are actually using the device. If the child is able to see the benefit of learning the skill – by pressing the button they are able to communicate – then they are more motivated to be able to master this skill.

How to help your Child master your chosen AAC Device

Once you have decided to try using an AAC device with your child, and you have chosen the one you want to try, the next stage is to introduce the AAC device to your child. Here are some easy steps to help you to do that:

As you can see if you are struggling with looking for signs my autistic child will talk, then an AAC device could be a way for you to help them. App2Vox has been developed in association with Autism Together in order to help the 700,000 people within the UK who have been diagnosed with Autism, to communicate.