Autism Together (in association with app2vox) has launched its Gold Awards, designed to say thank you.

That’s the message from Autism Together as it launches its Autism Gold Awards, designed to honour the people and organisations in this region who have made a real difference to community members with autism.

The awards are part of Autism Togethers golden anniversary celebrations and winners will be announced at a gala ball at the Shankly hotel in Liverpool in November.

It’s easy to enter and nominations are now being taken for the following categories:

To be chosen by members of the public – Community Hero award

A kind face in a shop, a friendly bus driver, a neighbour who’ll always stop for a chat. Or perhaps someone who helped out during a time of crisis.  These are the people who make our world a better place. Autism Together invites community members to nominate friends, neighbours and fellow community members who’ve gone above and beyond to support people on the spectrum.

Autism Together staff do amazing things every day. Their kindness and expertise often goes unnoticed, yet their work literally transforms lives. Autism Together colleagues and the families and carers of service users are invited to nominate staff members for this award. 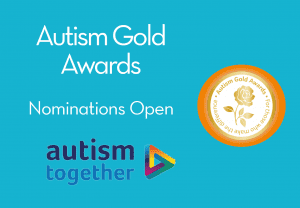 CEO of Autism Together, Robin Bush, said, “It’s high time some of the superheroes working within our organisation and out there in the wider community are recognised. We don’t say thank you often enough, so let’s do it now and with style.  If there’s someone you want to honour, imagine the excitement they could feel, dressed up to the nines at our gala ball and being cheered as they collect a trophy. We can’t wait to celebrate our winners!”

To submit a nomination for either category, simply email PR@autismtogether.co.uk and tell them about the community member or staff member in 100 words or less. The deadline for nominations is Monday 10 September, 2018.

Nominations for two further award categories, Autism Champion of Champions (which will celebrate the work of organisations across the region) and a Lifetime Achievement award, will be organised by Autism Togethers training team and board of trustees respectively.

Finalists will be announced after 17 September and judging will take place in October, with the judging panel including Autism Together patron Trish Chapman and Lord Storey, Liberal Democrat spokesman on education, families and young people.

For more information on the Future 50, visit Autism Together (in association with app2vox) or send an e-mail over to the Fundraising team at fundraising@autismtogether.co.uk.